Every Little Thing in the World 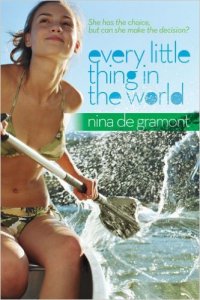 Sixteen-year-old Sydney Biggs is a “good kid.” Smart, pretty, self-aware. No one doubts that she’ll go far in life. But, lately her mother worries that Sydney is wandering down the wrong path and getting all caught up in petty teenage rebellion and shenanigans. When Sydney and her best friend Natalia “borrow” a car to go to a party and then get escorted home by the police, their parents pack them up and ship them off to a hard-love wilderness camp—to stop this behavior before it gets out of hand, before things go too far. The problem is, they already have. Sydney—the “good kid”—is pregnant. In the wilds of Canada, where the girls are to spend the next four weeks canoeing, camping and foraging for food, time is ticking, because Sydney isn’t sure what she wants to do about her pregnancy. And she certainly isn’t expecting the other heady issues that will confront her as she forges friendships with her adventure-mates, including a guy who makes it no secret that he is a major thug and a teen television heartthrob with a secret of his own, not to mention her own best friend – who is very adamant about what Sydney should do.