Murder on His Mind: The Untold Story of Australia’s Abortion Clinic Murder 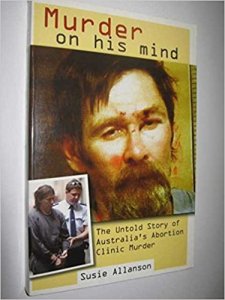 Five years since what became known as Australia’s Abortion Clinic Massacre. Murder on His Mind is a riveting read from “inside” the killer’s mind and alongside those who witnessed the horror of that winter day in leafy East Melbourne. Written By Susie Allinson, a clinical psychologist who was part of the East Melbourne fertility clinic team. The killer is the mystery man, who opted out to live in seclusion, rather like the Una bomber in the US. The mystery man who police could not put a name to without an unprecedented appeal to the public. A book with a powerful message, about people with committed views, as the abortion and abortion pill debate rages in Australia.