Oh My God What a Complete Aisling The Novel 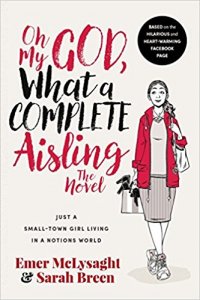 by Emer McLysaght and Sarah Breen

From Claire Hennessy: The sweet, gently comic narrative of a country girl in the Big Schmoke that is Dublin seems innocent and delightful at first but then delves into deeper issues. The ever-relatable Aisling must deal with her father’s failing health, but her new flatmate has another problem to tackle: she’s pregnant. The flatmate decides to reveal this, of course, while down for the weekend with Aisling’s lovely family. And in a moment that is among the most powerful of the novel, Aisling’s mammy reveals why she doesn’t have a problem with the flatmate wanting to terminate the pregnancy. Sure didn’t she have an abortion herself? In sharing this with Aisling, and the reader, her mammy challenges the stereotypical idea of who has abortions.

Aisling is twenty-eight and she’s a complete … Aisling. She lives at home in Ballygobbard (or Ballygobackwards, as some gas tickets call it) with her parents and commutes to her good job at PensionsPlus in Dublin. Aisling goes out every Saturday night with her best friend Majella, who is a bit of a hames (she’s lost two phones already this year – Aisling has never lost a phone). Aisling spends two nights a week at her boyfriend John’s. He’s from down home and was kiss number seventeen at her twenty-first. But Aisling wants more.