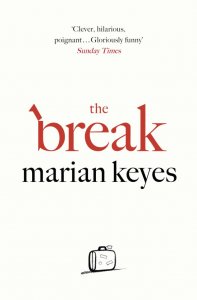 “With Keyes the woman in question is a girl in her late teens whom the protagonist needs to take care of and advocate for – a heartbreaking account of the difficulties in accessing abortion as an Irish woman and, more subtly, the poser of a soul-destroying question: what happens to the girls who do not have someone in their corner, fighting for them?” (from Claire Hennessy)

Amy’s husband Hugh says he isn’t leaving her. He still loves her, he’s just taking a break – from their marriage, their children and, most of all, from their life together. Six months to lose himself in South East Asia. And there is nothing Amy can say or do about it. Yes, it’s a mid-life crisis, but let’s be clear: a break isn’t a break up – yet… However, for Amy it’s enough to send her – along with her extended family of gossips, misfits and troublemakers – teetering over the edge. For a lot can happen in six-months. When Hugh returns, if he returns, will he be the same man she married? Will Amy be the same woman? Because if Hugh is on a break from their marriage, then so is she.