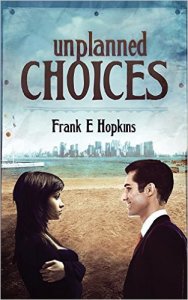 Unplanned Choices is a coming-of-age historical romantic drama, set in the late 1960s and early 1970s in New York City and Long Island during the turbulent period of the Vietnam War,the sexual revolution, the women’s movement, the civil rights struggle, and the quest for legalizing abortion. The novel is the story of Steve Lynch and his first love, Anna Marino. Both Anna and Steve are raised in the Roman Catholic faith and struggle with the church’s prohibition of sexual activity and their growing sexual drives. They both meet in college after abandoning the church. Anna became pregnant and died during an abortion, before abortion on demand became legal in New York. The novel describes the impact of the abortion on Steve, the abortionist, Anna’s family and friends, and one NYPD investigator who committed murder. If Anna could have legally had an abortion, she would not have died and the impact on the other characters in the novel would not have been as tragic. Situations similar to that portrayed in Unplanned Choices, could be replicated hundreds of thousands of times in the future if abortion becomes illegal or is severely restricted in the United States.