Zika: From the Brazilian Backlands to Global Threat 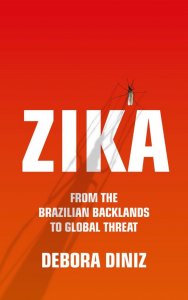 An astonishing investigation into the outbreak and spread of Zika and the resilience of the Brazilian people in the face of the epidemic.

The Zika virus is devastating lives and communities. Children across the Americas are being born with severe disabilities because of it. Yet during the desolating outbreak, Brazil played host to both the Olympics and the FIFA World Cup, leading many to suspect that the true impact of the virus has been subject to a cover-up of international proportions.

Beginning in the northeast, where the devastation has been most felt, professor of bioethics and award-winning documentary filmmaker Debora Diniz travels across Brazil tracing the virus’s origin and spread. Along the journey she meets a host of fearless families, doctors and scientists uncovering the virus’s impact on local communities. In doing so Diniz paints a vivid picture of the Zika epidemic, exposing the Brazilian government’s complicity in allowing the virus to spread while championing the efforts of local doctors and mothers who, working together, are raising awareness of the virus and fighting for the rights of children affected by Zika.