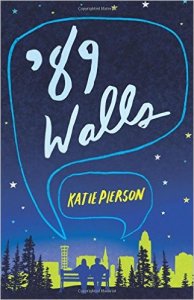 From Salon.com: Set in 1989, this teen romance finds protagonist Quinn discovering she’s pregnant about halfway through the book, despite having used condoms with her ex-boyfriend, Jason. She’s also already started dating a new guy, Seth, whom she does tell, along with her best friend and her mother, who’s disappointed but firmly supportive; she opts to not tell her father. Her mother drives her to the clinic, where Seth helps them navigate the protesters trying to block their way. Quinn meets with an abortion counselor who prescribes her the pill, even though having sex again is the last thing on Quinn’s mind.

Pierson gives us a heroine who doesn’t berate herself for having gotten pregnant, comes to terms with having judged other girls for doing so, and lets the burgeoning sexual tension between Quinn and Seth unfold at a slower pace than it would have otherwise, since Quinn is understandably hesitant about having sex again. While her abortion certainly affects her, especially her political views, which contrast with her father’s around the issue, aside from her holding off on sex with Seth, she quickly becomes swept up in other dramas that are far more pressing.