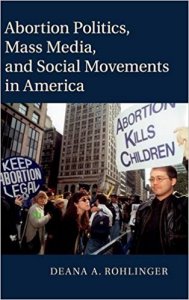 Weaving together analyses of archival material, news coverage, and interviews conducted with journalists from mainstream and partisan outlets as well as with activists across the political spectrum, Deana A. Rohlinger reimagines how activists use a variety of mediums, sometimes simultaneously, to agitate for – and against – legal abortion. Rohlinger’s in-depth portraits of four groups – the National Right to Life Committee, Planned Parenthood, the National Organization for Women, and Concerned Women for America – illuminates when groups use media and why they might choose to avoid media attention altogether. Rohlinger expertly reveals why some activist groups are more desperate than others to attract media attention and sheds light on what this means for policy making and legal abortion in the twenty-first century.