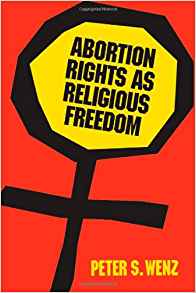 With the current composition of the Supreme Court and recent challenges to Roe v. Wade, Peter S. Wenz’s new approach to the ethical, moral, and legal issues related to a woman’s right to elective abortion may turn the tide in this debate. He argues that the Supreme Court reached the right decision in Roe v. Wade but for the wrong reasons. Wenz contends that a woman’s right to terminated her pregnancy should be based, not on her constitutional right to privacy, but on the constitutional guarantee of religious freedom, a basis for freedom of choice that is not subject to the legal criticisms advanced against Roe. At least up to the 20th week of a pregnancy, one’s belief whether a human fetus is a human person or not is a religious decision. He maintains that because questions about the moral status of a fetus are religious, it follows that anti-abortion legislation, to the extent that it is predicated on such “inherently religious beliefs,” is unconstitutional.