After Morgentaler: The Politics of Abortion in Canada 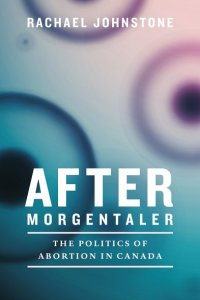 The landmark decision R. v. Morgentaler (1988) struck down Canada’s abortion law and is widely believed to have established a right to abortion. Although the decision removed one legal barrier, its actual impact is much less decisive, and women’s access to abortion in Canada remains uneven and at risk of being curtailed.

In After Morgentaler, Rachael Johnstone examines the state of abortion access in Canada today, maps its historical development since 1988, and argues that substantive access is essential to full citizenship for women. When the Morgentaler decision recast abortion as a health care issue, jurisdiction over the procedure shifted to the provinces, each of which chose to regulate access differently. Johnstone presents three provincial case studies – Quebec, Ontario, and New Brunswick – to demonstrate the role of both state and non-state actors in shaping access across the country. Informed by the current frameworks employed by reproductive-rights advocates in Canada, this book affirms the need to recognize abortion as an issue fundamentally tied to women’s equality while stressing the continued utility of rights claims as a means to improve access.