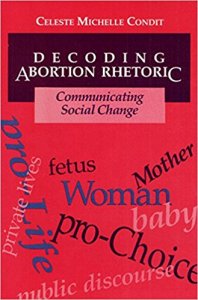 This demanding, scholarly work traces the rhetoric surrounding the abortion controversy in the United States from 1965 to 1985. Using a sophisticated framework of rhetorical analysis, Condit describes the process by which the persuasive argumentation and vocabulary used by “Pro-life” and “Pro-choice” advocates has evolved and how it has created a deadlocked situation at the activist level, while mass attitudes on abortion reflect a compromise between the two positions. For the general public, Condit says, abortion falls within the realm of personal choice, but is generally regarded as morally objectionable.