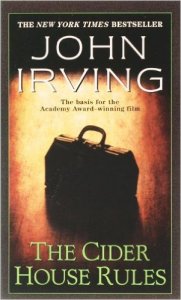 The novel follows Wilbur Larch, obstetrician and orphanage director, over the course of his very long life, with the main emphasis on the forty-some years he shares with his favorite and finally unadoptable orphan Homer Wells from the 1920’s to the 1950’s. Homer evolves into Larch’s apprentice, spending years with Gray’s Anatomy and real-life midwifery until there is little difference in training between Dr. and pupil. The father/son theme runs wide in this novel but has its genesis in Larch’s childlessness among many hundreds of orphans and Homer’s fatherlessness with Larch as father figure extraordinaire. The orphanage at St. Cloud’s has a deep secret that gives Larch his impetus to train a successor: it is the only place in a wide swath of rural Maine that a woman can receive a safe and professional abortion. Among the many births that keep the orphanage full and Larch and Homer busy in delivery, there is the other work of rescue that Larch pursues and Homer eventually rejects. The polemical possibilities of the pro-life and pro-choice debate are not missed in the long case of Larch and Homer, but it’s important to see this debate in the context of the time, and to see how Irving widens his lens on so much else in the moral universe.