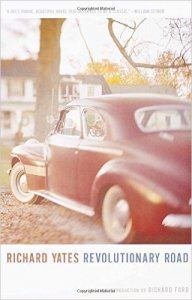 Hailed as a masterpiece of realistic fiction and as the most evocative portrayal of the opulent desolation of the American suburbs since it’s publication in 1961, Revolutionary Road is the story of Frank and April Wheeler, a bright, beautiful, and talented couple who have lived on the assumption that greatness is only just around the corner. With heartbreaking compassion and remorseless clarity, Richard Yates shows how Frank and April mortgage their spiritual birthright, betraying not only each other, but their best selves.

From Bustle.com: Abortion is like a ghost that meanders through Frank and April are an all-American couple, but their marriage began as the result of an unplanned pregnancy. Now, caught in a last-ditch effort to save her relationship, another pregnancy puts April in danger.