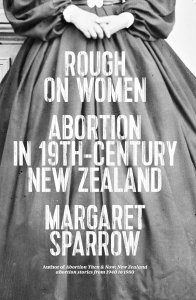 Rough on Women is, in some respects, the prequel to Abortion Then and Now: New Zealand abortion stories from 1940 to 1980, in which women recorded their firsthand experiences of abortion.

In contrast to the intimacy and frankness of that book, the women in Rough on Women are all long dead and little is known of their inner lives. Most of what we know about them comes from coroners’ reports and newspaper accounts, and in many cases we know more about their abortionists than the women themselves.

Rough on Women shows the lengths to which women will go to avoid bearing an unwanted child, and how far New Zealand has come in the battle for women to control their own fertility.