Sacred Choices: The Right to Contraception and Abortion in Ten World Religions 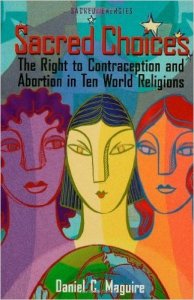 This book aims to show how ten major religious traditions in fact contain strong affirmations of the right to family planning, including contraception and even, when necessary, abortion. Maguire first shows how interrelated overpopulation is with poverty, ethnic injustice, gender injustice, and the maldistribution of economic resources. Often the world’s religions (most notoriously perhaps, Roman Catholicism) are thought to contribute only to the problem, rather than solutions, through their hostility to sex, education and equal rights for women, and birth control. In fact, argues Maguire, the ten scholars who consulted for several years about how these traditions treat issues of contraception and abortion find in them a true religious awe at the sacredness of life, a genuine openness to sexuality as a dimension of the sacred, and “alongside the ‘no choice’ position . . . a ‘pro-choice’ position that is too little known, even by adherents to the religion. That is the key message of this book.”