The Human Drama of Abortion: A Global Search for Consensus 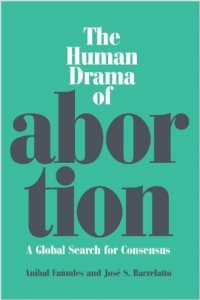 Deeply touched by the tragedies of botched abortions that they witnessed as medical students and young physicians in Chile in the 1940s and later around the world, the authors have attempted in their professional lives and now in this book to establish a framework for dialogue to replace the polarization that exists today. Doctors Faundes and Barzelatto use their decades of international work to document the personal experiences of different classes of women in different countries and those countries’ policies and practices. No other book provides such a comprehensive and reasoned examination of the entire topic of abortion, from the medical to the religious and ethical and from the psychological to the legal, in plain language understandable by non-specialists.

The central thesis is that there are too many induced abortions in the world today, that most are preventable and should be prevented–a middle ground that both pro-life and pro-choice advocates can accept. The first part of the book reviews why women have abortions, as well as the magnitude and consequences. The second part examines values. The third part discusses effective interventions. The final part states conclusions about what can be done to reach a necessary social consensus.