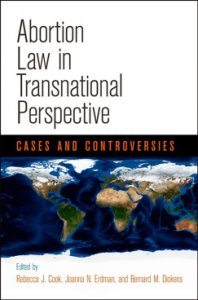 It is increasingly implausible to speak of a purely domestic abortion law, as the legal debates around the world draw on precedents and influences of different national and regional contexts. While the United States and Western Europe may have been the vanguard of abortion law reform in the latter half of the twentieth century, Central and South America are proving to be laboratories of thought and innovation in the twenty-first century, as are particular countries in Africa and Asia. Abortion Law in Transnational Perspective offers a fresh look at significant transnational legal developments in recent years, examining key judicial decisions, constitutional texts, and regulatory reforms of abortion law in order to envision ways ahead.

The chapters investigate issues of access, rights, and justice, as well as social constructions of women, sexuality, and pregnancy, through different legal procedures and regimes. They address the promises and risks of using legal procedure to achieve reproductive justice from different national, regional, and international vantage points; how public and courtroom debates are framed within medical, religious, and human rights arguments; the meaning of different narratives that recur in abortion litigation and language; and how respect for women and prenatal life is expressed in various legal regimes.