Breaking the Abortion Deadlock: From Choice to Consent 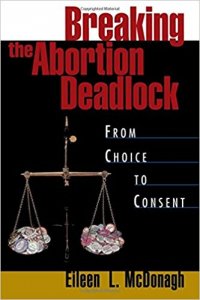 While it is commonly assumed that state protection of the fetus as a form of human life undermines women’s reproductive rights, McDonagh instead illuminates how it is exactly such state protection of the fetus that strengthens, rather than weakens, not only women’s right to an abortion, but even more significantly, women’s ability to call on the state for abortion funding. McDonagh’s approach, by bridging the divide between pro-life and pro-choice advocates, revolutionizes the abortion debate in a way that opens up a whole new avenue for resolving the abortion conflict and advancing women’s rights.

McDonagh reframes the abortion debate by locating the missing piece of the puzzle: the fetus as the cause of pregnancy. The central issue then becomes what the fetus, as an active agent, does to a woman’s body during pregnancy, whether that pregnancy is wanted or not. McDonagh graphically describes the massive changes produced by the fetus when it takes over a woman’s body. As such, pregnancy is best depicted not as a condition that women have a right to choose but rather as a condition to which they must have a right to consent.