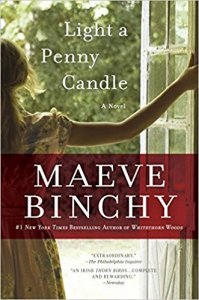 The first time I encountered mostly guilt-free abortion in fiction – paired with the repressive attitude in Ireland – was in Maeve Binchy’s debut novel, Light a Penny Candle, from 1982. Binchy never shied away from the issues affecting the lives of Irish women, despite being often dismissed as “merely” a women’s fiction writer. She touches on abortion in several of her short stories, but Light a Penny Candle (which takes place in the 1940s, 1950s and 1960s) is her most explicit engagement with the topic. (from Claire Hennessy)

To escape the chaos of London during World War II, young Elizabeth White is sent to live a safer life in the small Irish town of Kilgarret. It is there, in the crowded, chaotic O’Connor household, that she meet Aisling—a girl who soon becomes her very best friend, sharing her pet kitten and secretly teaching her the intricacies of Catholicism. Aisling’s boldness brings Elizabeth out of her proper shell; later, her support carries Elizabeth through the painful end of her parents’ chilly marriage. In return, Elizabeth’s friendship helps Aisling endure her own unsatisfying marriage to a raging alcoholic. Through the years, they come to believe they can overcome any conflict, conquer any hardship—as long as they have each other. Now they’re about to find out if they’re right…