Living in the Crosshairs: The Untold Stories of Anti-Abortion Terrorism 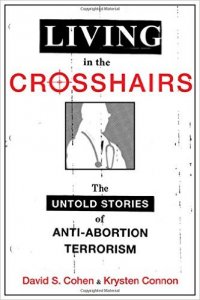 Abortion is a legal, common, and safe medical procedure that one in three American women will undergo. Yet ever since Roe v. Wade was decided in 1973, anti-abortion forces have tried nearly every tactic to eliminate it. Legislative and judicial developments dominate the news, but a troubling and all-too-common phenomenon – targeted vigilante action against individual abortion providers – is missing from the national discussion, only cropping up when a dramatic story like the murder of an abortion provider pushes it to the forefront. Every day, men and women who are associated with abortion care are harassed, threatened, stalked, picketed, sent hate mail, and otherwise terrorized.

In Living in the Crosshairs, the voices of these providers are heard for the first time, through extensive interviews that David S. Cohen and Krysten Connon conducted across the country. Drawing on ideas from the interviews, the authors propose several legal and societal reforms that could improve the lives of providers, foremost among them redefining targeted harassment as terrorism rather than protest. Living in the Crosshairs is a rich and humane portrait of women’s health professionals who persist in their work despite harassment, because they believe in what they are doing.