The New States of Abortion Politics 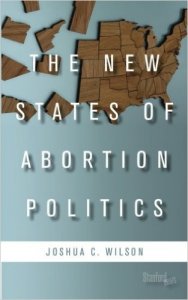 The 2014 Supreme Court ruling on McCullen v. Coakley striking down a Massachusetts law regulating anti-abortion activism marked the re-engagement of the Supreme Court in abortion politics. A throwback to the days of clinic-front protests, the decision seemed a means to reinvigorate the old street politics of abortion. The Court’s ruling also highlights the success of a decades’ long effort by anti-abortion activists to transform the very politics of abortion. This book tells the story of this movement, from streets to legislative halls to courtrooms. With the end of clinic-front activism, lawyers and politicians took on the fight. Anti-abortion activists moved away from a doomed frontal assault on Roe v. Wade and adopted an incremental strategy―putting anti-abortion causes on the offensive in friendly state forums and placing reproductive rights advocates on the defense in the courts. The Supreme Court ruling on Whole Woman’s Health v. Hellerstedt in 2016 makes the stakes for abortion politics higher than ever. This book elucidates how―and why.