Winning Choice On Abortion: How British Columbian and Canadian Feminists Won the Battles of the 1970s and 1980s 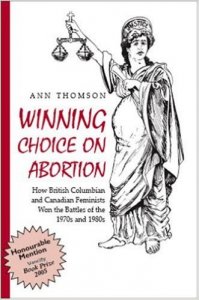 In 1970, the Abortion Caravan travelled from Vancouver to Ottawa to demand legalization of “A Women’s Right to Choose.’ Nearly 500 women from across Canada joined them in dramatic actions on Mother’s Day weekend – causing the House of Commons to abruptly adjourn in the midst of debate. However, the abortion law remained in the Criminal Code for nearly two more decades. BC feminists returned home and fought for repeal of the law, and to defeat anti-abortion take-overs of public hospitals. It was illegal to perform abortions in free-standing clinics.

When Dr. Henry Morgentaler won his case before the Canadian Supreme Court in 1988, and abortion became fully legal, it took Vancouver feminists only months to open BC’s first abortion clinic. ‘Everywoman’s Health Centre’ has survived against the odds -blockades, break-ins, death threats, financial problems, and a relentless anti-abortion court case. The whole social and political structure of the province was put on tilt. The reactions of government, hospitals, doctors, community organizations, political parties, the labour movement, and above all, women, are the stuff of this book. Winning Choice on Abortion tells all the stories, from the personal to the political, from the ‘Abortion Caravan’ through the first year of ‘Everywoman’s Health Centre.’