The foundation of anti-choice activism and legislation assumes that, if abortion is criminalized, abortions will no longer be performed. Nothing could be further from the truth. This myth also tries to erase the tragic history of women dying from unsafe, illegal abortion – an avoidable pandemic that is still common in many developing countries today.

The main reason abortion was legalized in the first place was to protect public health – women were dying or being injured because a large proportion of women with an unwanted pregnancy will resort to abortion, regardless of any laws. In Britain during the 18th and 19th centuries, the main causes of maternal mortality were puerperal pyrexia, hemorrhage, convulsions, and illegal abortion. In the United States, the number of illegal abortions during the 1950s and 1960s ranged from an estimated 200,000 to 1.2 million per year, with up to 5,000 women dying each year from unsafe abortion. During the abortion ban in Romania from 1965 to 1989, implemented to increase the birth rate, more than 9,000 women died from complications due to illegal abortions and the birth rate increased very little.

Restrictive abortion laws don’t even lower the rate of abortions. Global research points to a correlation between restrictive abortion laws and higher abortion rates. A survey of abortion rates from 2010 to 2014 shows that developed regions have an average of 27 abortions per 1,000 women of childbearing age, while developing regions have 37 /1000. Across Africa and Latin America (including the Caribbean), where abortion is illegal under most circumstances in most countries, the abortion rate is 34/1000 and 44/1000 abortions, respectively. The lowest rates in the world are found in North America (17/1,000), Western Europe (18/1,000), and Oceania (19/1,000), all regions where abortion is generally legal on broad grounds.

When abortion is illegal, it is unsafe.

The only thing that criminalizing abortion changes is the safety of the procedure. New studies estimate that 8–18% of maternal deaths worldwide are due to unsafe abortion, and the number of abortion-related deaths in 2014 ranged from 22,500 to 44,000. Almost all occur in places where abortion is illegal. Further, about 6.9 million women receive treatment for complications, with a further 40% of women with complications never receiving treatment. When abortion is criminalized or unavailable, it only creates unsafe conditions and results in more deaths. Illegal abortion is frequently done later in pregnancy (around 15 weeks gestation on average) by an untrained person (often the woman herself), under unhygienic conditions, and with unsuitable equipment. Although some doctors provide safe abortions when it’s illegal, such as in Poland and many other countries, such procedures are usually very expensive and only available to well-off women.

The website www.abortionfilms.org has compiled a list of films and videos about abortion throughout history and today, with many from countries where abortion is illegal.

Improved access to contraception and sex education helps reduce unwanted pregnancy, which is the main cause of abortion. Favourable economic conditions, good access to healthcare, and full human rights for women also enable women to have children when they want to. But women will always need access to safe abortion care because contraceptives are not 100% effective and human error further reduces efficacy.

Figure 1: Timeline for legalisation of abortion in various countries 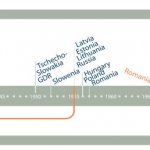 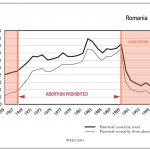 Figure 3: Abortion prohibition in the USA 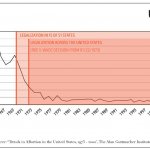 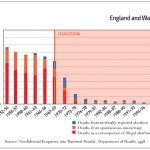 Journal of the Royal Society of Medicine, British Maternal Mortality in the early 18th and 19th centuries, by Geoffrey Chamberlain (2006)

Our Bodies, Ourselves, The Impact of Illegal Abortion (2014)